The LXIII Council Meeting will take place in Seville, Spain. Following the ESTIEM COVID-19 Regulations, the participants of the LXIII Council Meeting must be vaccinated or recovered and they should provide the respective certificate when it is asked. In addition, participants need to present a negative result for either PCR or Antigen test as well as the respective confirmation document.

The ESTIEM Board and Local Group Seville would like to prevent participants from booking their tickets before they are registered in the event on the portal and propose waiting until the dates closer to the Council Meeting. It is also highly recommended to book refundable tickets and invest some money on travel insurance, in case that the pandemic situation does not allow us to have a physical event.

To learn more about the Council Meeting...

The Council Meeting is the statutory meeting of ESTIEM and takes place twice a year.

It is composed of two parts, the General Assembly, where everyone is updated on what is going on in ESTIEM and decisions are made through voting and the Working Groups, Training Sessions and Company Workshops, where smaller groups either work to develop ESTIEM, or improve their soft skills.

It is the place where we gather to invest time in our organisation, to meet new and old friends, and where we celebrate the ESTIEM spirit. See you there!

The LiveStream of the LXI CM

We have also created a Telegram channel to share updates with everyone. You can join by clicking on the icon above!

How will we do it?

The digital General Assembly will take place live on Zoom, here we will have delegates, applicants, boardies, secretaries, voting committee, and more figures needed to make the assembly run smoothly.

This voting software will substitute the usual pen and paper we deal with in the usual Council Meetings. Each LG will have to choose one delegate to be the voting responsible, communicate that choice to us, and we will email this person the links to cast the vote following the Instant Run-off system.​

What about the streaming?

The streaming will be held on YouTube! One person will take care of bringing your question from the streaming into the call to be answered live. All questions in the live stream will be saved so that also those for which we had no time will receive an answer during breaks or after the Council Meeting.

All our entities will record video reports to save up time in the General Assembly, watch them all at the playlist we will prepare for you! Soon you will be able to click on the YouTube icon above to start binge-watching!

Click on the icon above to join ESTIEM's Discord server, where you will see all the reports and ask questions! Remember to accept our privacy policy in the "welcome" channel to access the contents!

Given the quickly-evolving situation, we created a Telegram channel to share last-minute updates with everyone, join by clicking on the icon above!

What will be voted upon?

Local Groups can apply to...

Academic Deparment
Intercultural Department
Others
Let's see who is today

My name is Tanja Gagić (also known as Taki) from Local Group Belgrade and I am very honoured to present my second application for Project Leader of ESTIEM Magazine.

A little bit of backstory: It has taken me quite some time to find my spot under the ESTIEM umbrella. Since joining my Local Group in 2017, I have explored different paths for my ESTIEM self: IT, Analysis and Human Resources. Two years had passed until I stumbled upon my first big ESTIEM love: the development of ESTIEM Blog. As Samuel Beckett once said: “The creation of the world did not take place once and for all time, but takes place every day.”, and imagine my joy when I got to create something entirely new and entirely my style! I was storming through old ESTIEM Magazine issues, completely fascinated by the world I was once unaware of: the archive of what ESTIEM went through in the past (at the time) 29 years. It hasn’t taken me much until I joined the ESTIEM Magazine team, ready to be a part of the equation, ready to deliver an epic ESTIEM Magazine issue.

And we did just that.

As the Article Acquisition task group leader, as an ESTIEMer, and as Taki, the moment I had the 57th issue of ESTIEM Magazine in my hands for the first time was probably one of the proudest moments in my life. It was also the moment I realized that I want to see myself being the leader, giving back as much as I can, all in order to ensure ESTIEM Magazine remains being as inspiring as I see it. And now, I can say that applying and (spoiler alert) being elected as the Project Leader of ESTIEM Magazine’s 59th issue in May felt so incredibly fulfilling that it exceeded anything I’ve expected.

Now, almost 6 months later, I’d love to be given the opportunity to dive back in and make sure the 60th issue lives up to all the expectations and surpasses them. The areas I would focus on in my second mandate as Project Leader are:

Thank you for your attention. I will be really happy to answer any questions or hear suggestions you might have. You can contact me through email (tanja.gagic@estiem.org).

The Hours of the Slots 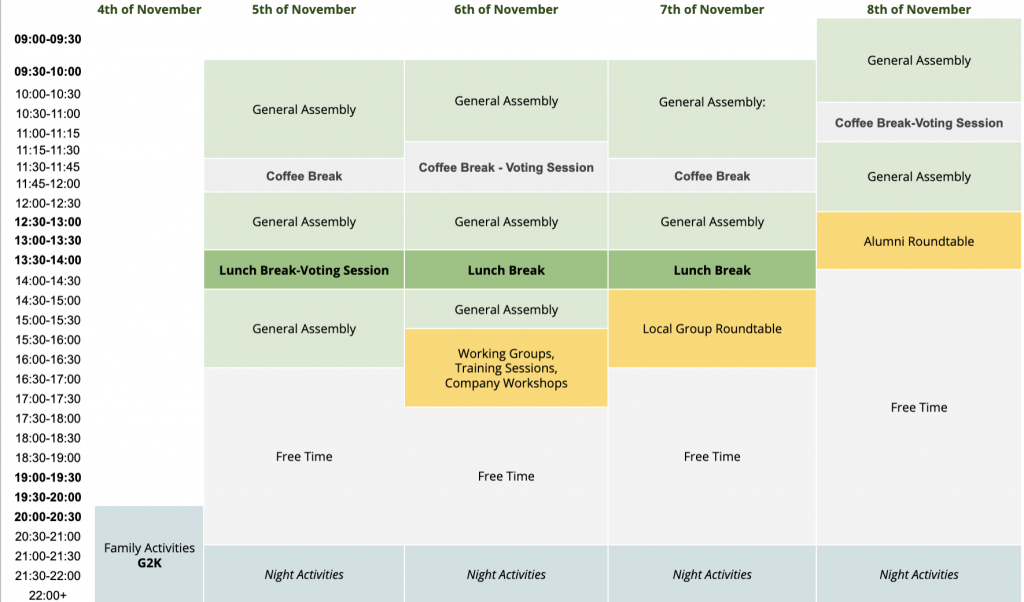 How many delegates will each Local Group be represented by?

Every Local Group can be represented by only one Delegate. This means that there will be 75 Delegates, one for each Local Group.

Do I need to be vaccinated to attend LXIII Council Meeting Seville?

Spain is in the red zone on the COVID Map based on the European Centre for Disease Prevention and based on the new ESTIEM COVID Regulations, International Events can be organized only with participants that have vaccination or recovery certificate. This means that the participants of the LXIII Council Meeting Seville must be vaccinated or recovered and they should provide the respective certificate when it is asked.

Which vaccines are valid in order to attend the LXIII Council Meeting Seville?

Any COVID vaccine is valid in order to attend the event. There is no distinction between approved and non-approved by the European Union Vaccines from ESTIEM’s side. But make sure that you fulfilling the needed requirements to enter the country.

Do I need to be tested before the event?

Yes, participants need to be tested negative with either PCR (72 hours before) or Antigen (48 hours before) tests before their arrival to the event. Moreover, during the arrival, they will need to present the negative test result to the organizers.

When should I book my tickets?

As the current situation is pretty uncertain, please do not book your tickets before you are registered and try to wait until the dates closer to the LXIII Council Meeting Seville. We would also suggest that you book refundable tickets and invest some money on travel insurance, in case that the pandemic situation doesn’t allow us to have a physical event.

What should I do if I need a Visa Invitation Letter?

Local Group Seville can provide a Visa Invitation Letter. To request it, you can send an email to lr.seville@estiem.org and add cmcontact@estiem.org in CC.

Which extra places can I apply for?

What does the participation fee cover?

The Participation Fee for LXIII Council Meeting Seville is 100 euros, it covers food, accommodation, transportation during the event, and activities included in the agenda.

What should I do if I have more questions?

To ask more questions, you can use the form at the end of the page or send an email to cmcontact@estiem.org.

Can I attend the LXIII Council Meeting Seville if I am not registered?

Due to the current situation we are doing our best to make the LXIII Council Meeting Seville happen in the safest possible way. So in order to prevent any unforeseen situations, we have decided to be strict with the number of participants and avoid interactions with externals. Therefore, only registered people and the organiser's team can attend the event’s activities.

If you have more questions about the LXIII Council Meeting Seville, please ask them here​!